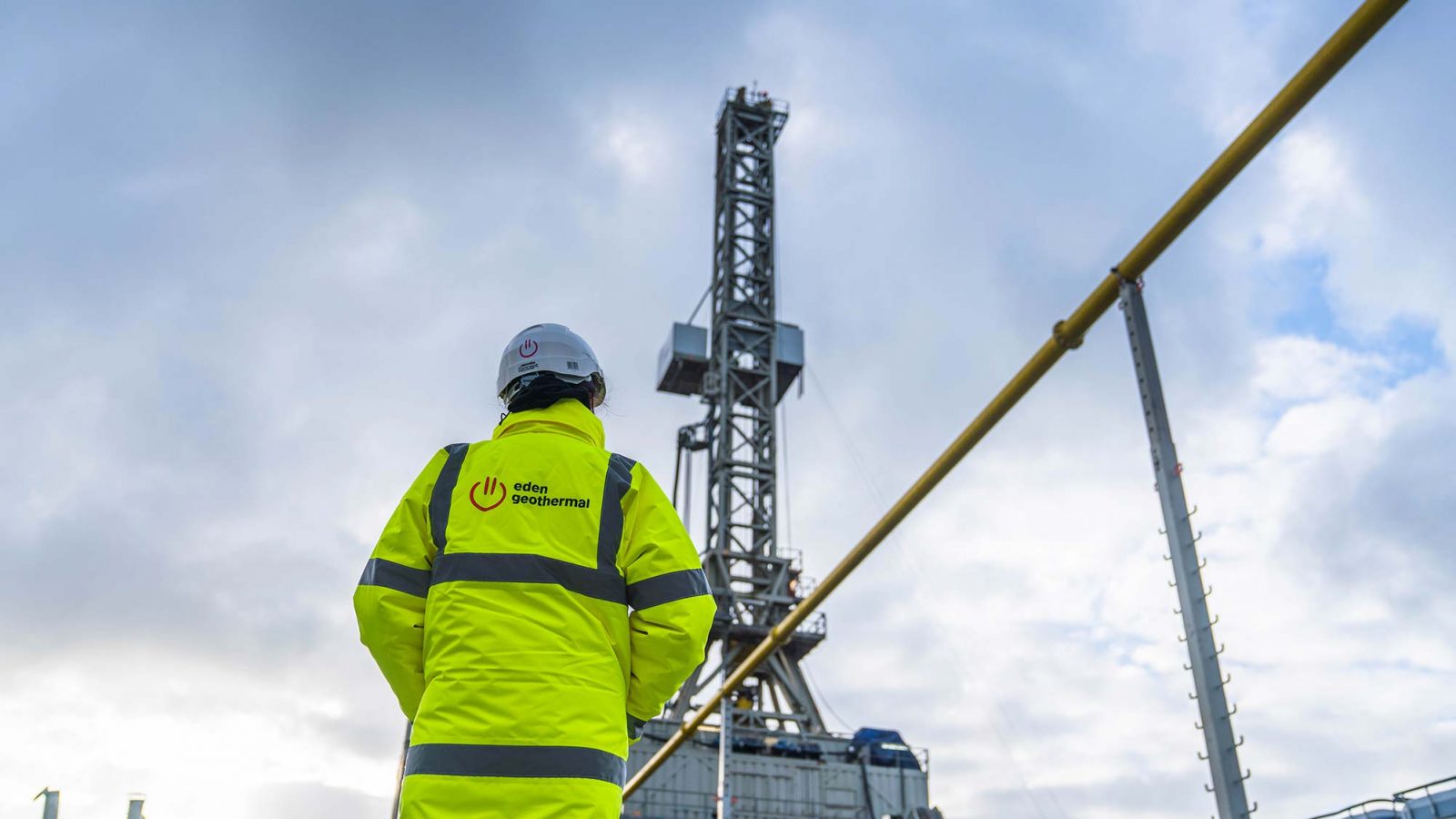 Eden Geothermal Ltd was set up by three partners: Eden Project, EGS Energy Ltd, and Bestec (UK) Ltd to unlock the geothermal energy deep in the granite beneath Cornwall.

We have drilled our first deep (4.9km) well at the Eden Project, to heat its famous Biomes, greenhouses and offices.

This is the first phase of a two well development, paving the way for the second phase: another well to about 4.5km and an electricity plant.

Meet the team making it all happen below – or go to the Eden Geothermal Project page to find out more about the project.

Richard is a qualified lawyer and worked in various City firms for several years. He then joined Cazenove & Co (now JP Morgan Cazenove) and was in their Corporate Finance team for 12 years. He was a founding partner of institutional stockbrokers Arden Partners plc in 2002 and Head of Corporate Finance for most of his time with the firm, with a particular focus on Energy, Power and Renewables companies. He played an important part in building the Arden business, both domestically and internationally. He established and grew the corporate team from scratch to close to 50 retained listed corporate clients. He is now on the boards of and working closely with a range of companies, both publicly quoted and private.

Tony is a mining engineer, with a wide knowledge of geology and mining in Cornwall. Between 1980 and 1991 Tony worked as Drilling Support Engineer during the drilling of the three 2,000 – 2,500 m deep wells in the Carnmenellis Granite at the Camborne School of Mines Hot Dry Rock Geothermal Project. After this he became Technical Engineer involved with various aspects of creating, developing, testing and remediating the demonstration EGS reservoirs; latterly assisted with the feasibility assessment for a 6km deep system. Subsequently he worked for a mining consultancy based in Cornwall until joining EGS Energy in 2010 as Operations Manager, before becoming an Executive Director in 2013. Since 2017, Tony has also worked on the United Downs Deep Geothermal Project for Geoscience Ltd.

Dan is Development Director at the Eden Project, leading the early stages of project development and implementation including relationship building and project design. He is responsible for the delivery of a number of projects including the National Wildflower Centre, Eden’s social prescribing programme – ‘Nature’s Way’, and ‘Deep Roots New Shoots’ – a nature-based project for under 5’s and their families.

Having joined Eden in 2002, Dan has supported Eden’s funding activity across a number of sectors including public funds, trusts and foundations raising significant funds to pay for capital improvements on site as well as revenue funds for programmes and projects.  In his early role with Eden, Dan was instrumental in securing and managing funds awarded by the Government, Europe and the Lottery. He played a leading role in the establishment and maintenance of key regional and national stakeholder relationships, helping to bring some important Eden initiatives to reality, including The Core building, The Big Lunch programme and Eden Geothermal.

Phil is a Director at Gravis Capital Management, where has overall responsibility for the management of GCP Infrastructure Investments Limited, a FTSE 250 investment company focussed on UK infrastructure with a market capitalisation of c. £1bn. Over the 5 years since joining Gravis, Phil has principally been involved in the identification and structuring of new investment opportunities in the infrastructure sector. Phil has been the lead fund manager of GCP Infra for 2.5 years, during which time he has also led the portfolio management and investor and board communication activities.

Phil joined Gravis from Foresight Group, where he was responsible for investments in the waste and renewable sectors, including large waste wood combustion projects and a pipeline of anaerobic digestion projects across the UK. Philip has been involved in the energy sector for nearly 15 years, working initially as a consultant within PA Consulting’s energy practice, focusing on energy markets and energy asset valuations. In 2008, he moved to Gazprom Marketing and Trading, working in risk management across a number of commodities before moving into the clean energy team.

Dawn is Group Chief Financial Officer for the Eden Project, responsible for all group finance matters including Accounting, Tax and Strategic Planning, alongside responsibilities for Legal and ICT. Dawn joined Eden from ChangeGroup International plc, a world leading Foreign Exchange and financial services business where she had been the Group CFO for three years. Prior to this she was at HMSHost International, a division of Autogrill SpA, based in Amsterdam, where she had been for 10 years. Her roles here included International CFO, where she was responsible for all aspects of Finance, and Vice President EMEA, where she assumed the overall running of the division and a workforce of over 2,500 people.

Before joining HMSHost, Dawn was at Burger King in the UK and Netherlands for eight years, covering various roles including Business Development and FP&A before heading up the business in the Netherlands. Dawn started her career in Grand Metropolitan (latterly Diageo) where she studied Chartered Management Accountancy whilst progressing her career through different roles, including Internal Audit.

Before leading Eden Geothermal, Gus was Head of Policy at Eden, developing Eden’s sustainability and science programme. This involved a wide variety of educational exhibits such as the Wellcome Trust Funded Invisible Worlds programme, partnership projects and research as well as keeping an eye on Eden’s own emissions.  The ambition to generate Eden’s own renewable heat and power has been a cornerstone of strategy for more than a decade, and Gus has been working on the geothermal project since 2012. She has been at Eden since 2001 and has created content and policy in many subject areas: biodiversity, sustainability, development, climate, energy, transport and mining. She specialises in partnership projects with industry, academia and the public sector.

Joerg is one of the leading specialists in the world on developing and producing geothermal energy from Enhanced Geothermal Systems. Post-doctorate at Stanford University and Dowell-Schlumberger, USA, specialising in borehole measurements and stimulation of deep boreholes; PhD in hydraulic surveying and rock stress analysis of deep boreholes; and Diplomas in Geophysics. He is a specialist in well and system testing, including borehole measurements and stimulation techniques of deep boreholes. Joerg is a Member of the German Geothermal Association (Bundesverband Geothermie) and a Member of the Geothermal Resources Council, USA. He has extensive experience in both conventional and engineered geothermal systems and their management. Jorg has completed two 4MWe capacity geothermal plants at Landau and Insheim in Germany for GeoX GmbH.

Founder and Technical Director of EGS Energy Ltd 2009; was consultant to ORMAT Technologies, Inc. and Chevron Corporation, USA; Shell International; BESTEC GmbH; Green Rock Energy Australia; Geodynamics Australia; Lawrence Livermore Labs, USA; and an advisor to US Dept. of Energy. He has represented International Energy Agency’s geothermal group (IEA/GIA) on the International Panel on Climate Change and was the task leader for deep geothermal (EGS) on IEA/GIA for 15 years. Roy has extensive experience in the development and management of deep geothermal projects (EGS) with over 35 years’ experience. From 1976 to 1990 he was seconded from BGS to CSM as head of the geophysics department and in 1987 became Deputy Project Director at the HDR geothermal project in Cornwall. In 1990, he was seconded to the European EGS research geothermal programme at Soultz-sous-Forets, France, as Chief Scientist and Project Coordinator, a role held until 2005. During this period, successful deep geothermal systems were created at 3,600 m depth and then at 5,000m depth. In 2018 Roy (EGSE) received GRC’s “Geothermal Special Achievement Award” in Reno for his contribution to geothermal development worldwide.

Steve joined Eden Project in 2018 and has been with Eden Geothermal since September 2020. His background has covered a very broad range of Engineering disciplines from heavy engineering in the steel industry to various roles in FMCG and consultancy.

Steve’s knowledge of the geographical area and supporting networks, and his in-depth experience of working as Eden’s Estates & Facilities Manager have been invaluable in ensuring that we have the correct site infrastructure to support the project.

Chris has 23 years of drilling experience worldwide including many geothermal wells in Germany and France. When he’s not working he’s generally sailing or messing around on the water and racing in events such as the Rolex Fastnet. As a resident of Cornwall he’s very excited to see geothermal energy being developed in the county.

Before joining Eden GEothermal, Robbie spent 5 years working on drilling rigs across Europe and the Middle East with Schlumberger. Robbie studied Petroleum Engineering to master’s level at Heriot Watt University and has been involved in both hydrocarbon and geothermal exploration projects in his career to date.

Paul was born and bred in Cornwall, studied Accountancy at University of Exeter, and has been a qualified Chartered Accountant for over 30 years. Paul spent 16 years working in accountancy practice at the largest independent firm of accountants in Cornwall, then 11 years in senior finance roles at two of the UK’s largest telecoms dealers in the SME sector. At Eden Project since 2011, Paul was Financial Controller before switching to Eden Geothermal in 2019. As Eden’s Financial Controller, Paul was responsible for the management and statutory accounts for all entities in the Eden Trust group, day to day cash management, budgeting, overseeing Eden’s financial procedures, liaising with and reporting to auditors, funders, HMRC and other relevant statutory bodies.

Claire joined the company in December 2019. Her background is in project development and management in the charity, community and environmental sectors. Claire’s previous roles have included Office / Operations Manager, Project Manager, Development Manager, Community Fundraiser and Volunteering Support Officer, with organisations including British Red Cross, Friends of the Earth and Network Recycling.