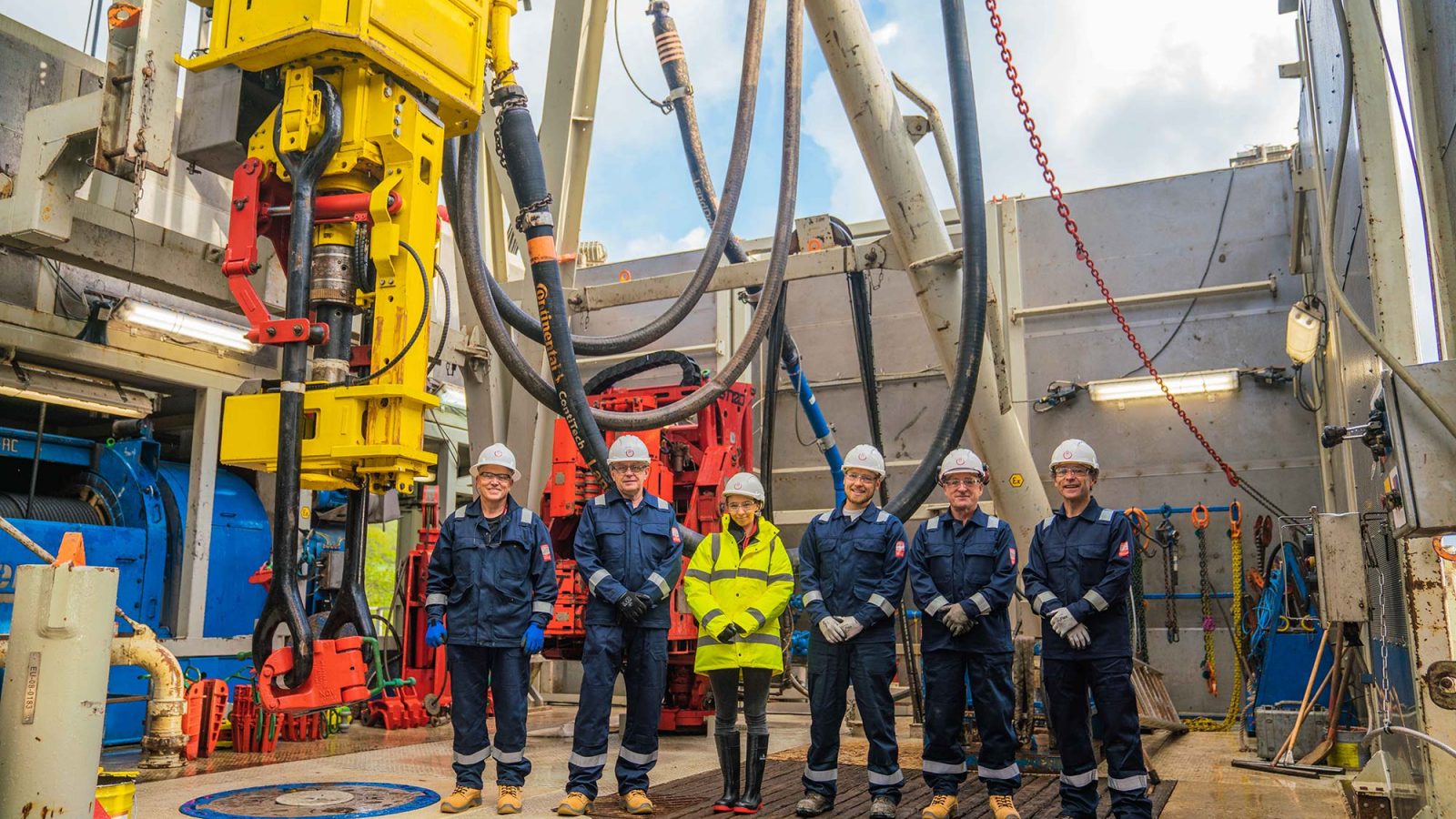 Many of the personnel on site have come from the oil and gas sector. At Eden Geothermal, we believe geothermal represents a great opportunity to use the technology, expertise and skills from this sector in a greener way, as we transition away from fossil fuels and towards clean, renewable energy. You can meet the Eden Geothermal engineering and operations team here.

The rig crew: do you know your roughnecks from your roustabouts?

Our drilling contract is with a British drilling firm, but the rig and most of the drilling crew are supplied through a subcontract to a Czech company, MND, who have both a powerful enough rig, and the geothermal expertise, to drill this well. Here’s a snapshot of some of the key roles. (You might be surprised by some of the job titles…)

The drilling contractor’s senior supervisor. The toolpusher is highly experienced and has usually worked his/her way up through the ranks of drilling crew positions. His or her job is largely administrative, including making sure the rig has enough materials, spare parts and skilled personnel to operate efficiently. The toolpusher also serves as an experienced advisor to other team members, in particular the Drilling Supervisor.

Supervises the rig crew. The driller makes sure the rigsite operates efficiently, and is responsible for the safety of the crew. He or she has many years of experience, and knows how to carry out all the jobs on the rig, having usually worked their way up through more junior roles. The driller operates the pumps, drawworks, and the rotary table from the driller’s console located in “the doghouse.” The driller also operates the drawworks brake using a long-handled lever and so is sometimes referred to as the person who is “on the brake.”

Works under the direction of the driller to make or break connections as drillpipe is run in or out of the hole. On most drilling rigs, roughnecks are also responsible for maintaining and repairing much of the equipment found on the drill floor and derrick. The roughneck typically ranks above a roustabout and beneath a derrickman.

A manual labourer who assists the more specialist personnel on the rig by carrying out a wide range of essential support and maintenance tasks such as cleaning working areas, cleaning threads on drillpipe, digging trenches or scraping and painting rig components.

A rig crew member who works high up on the derrick at the monkey board. In a typical trip out of the hole (TOH), the derrickman wears a special safety harness to enable him/her to lean out from the monkey board to reach the drillpipe in the centre of the derrick or mast. He or she will then throw a line around the pipe and pull it back into the fingerboards, where it’s stored until it’s time to run the pipe back into the well. In terms of skill, physical exertion and perceived danger, a derrickman has one of the most demanding jobs on the rig crew – it’s definitely a role that needs a good head for heights! In an emergency, the derrickman can quickly reach the ground by an escape line known as the Geronimo line.

Other specialist professionals involved in developing the well

Here’s a snapshot of some of the other key roles on site. On EG-1, these are carried out by people from a large number of different service companies.

Responsible for making sure we drill the well as closely as possible to the planned trajectory. In a well like this one, which is vertical to a certain depth and then ‘kicks off’ more horizontally towards its target zone, the DD oversees ‘deviating’ the well from vertical and directing drilling in a specific heading. He or she takes into account critical factors such as rotary speed, weight on bit and mud flowrate, and assesses when it’s necessary to stop drilling to take surveys of the wellpath.

Prepares a set of specialist drilling tools that are run downhole behind the bit and which feed back information to surface whilst drilling. On this well, that’s mainly surveys which allow the DD to check how close to the planned well trajectory we are.

Prepares the right drilling fluid or “mud” for the drilling environment, ensuring the rock cuttings will be transported efficiently to surface. The density of the fluid pumped down hole must be kept within the “safe mud weight window”. If the density is too high, we risk fracturing the rock we’re drilling through. If the density is too low, there’s a risk that any fluids naturally present in the rock formation will be drawn into the well bore. This is known as a “kick”.

Collects samples of rock cuttings at regular intervals and prepares them for analysis with a microscope. Once the well has been drilled to Total Depth, the mud logger will have data identifying all the different rock types we have drilled through. The mud loggers also have sensors installed on the rig which monitor parameters such as mud temperature, mud pit volume and the presence of any gases from the well.

Works closely with the mud loggers to create a lithology profile (a profile of the rock composition) throughout the well. The geologist studies and analyses rock cuttings from the well in order to identify the rock formation into which we’re drilling. Specialist tests, rock-cutting data, wireline data, core samples and other data are analysed and evaluated to inform the drilling process.

Oversee the cuttings handling process and manage the disposal of both fluid and solid waste, with a focus on waste minimisation and reuse. Our well could be over 5km in length so there will be a significant volume of granite cuttings to process and dispose of.

Carry out ‘wireline logging operations’ in which different types of data from downhole are collected and recorded with reference to depth. Sensors are lowered down the cased hole on an electrical ‘toolstring’ or cable and these instruments can measure many different things, including flow and case condition. Wireline logging in a deep geothermal well is made more challenging by the high temperatures, which necessitate very specialist equipment.

When we’ve drilled to the end of a section of the well, at a certain (planned) depth, we pull the drillstring out of the hole and ‘run’ steel casing into it. The casing acts as a liner, sealing off the well from the rock that has just been drilled and from any fluids in the formation. The casing hand is responsible for making sure the casing joints (individual pieces of casing) are run into the well and positioned correctly.

Once the casing is in place, the cement engineer prepares a specialist slurry which is pumped down the well and sets the casing in the hole. This is no ordinary cement! In a geothermal well, we expect the casing to expand and contract significantly as it’s exposed to the high temperature fluids we’re looking for. The cement has to be able to cope with, and accommodate, this.

Back
Drilling and operations