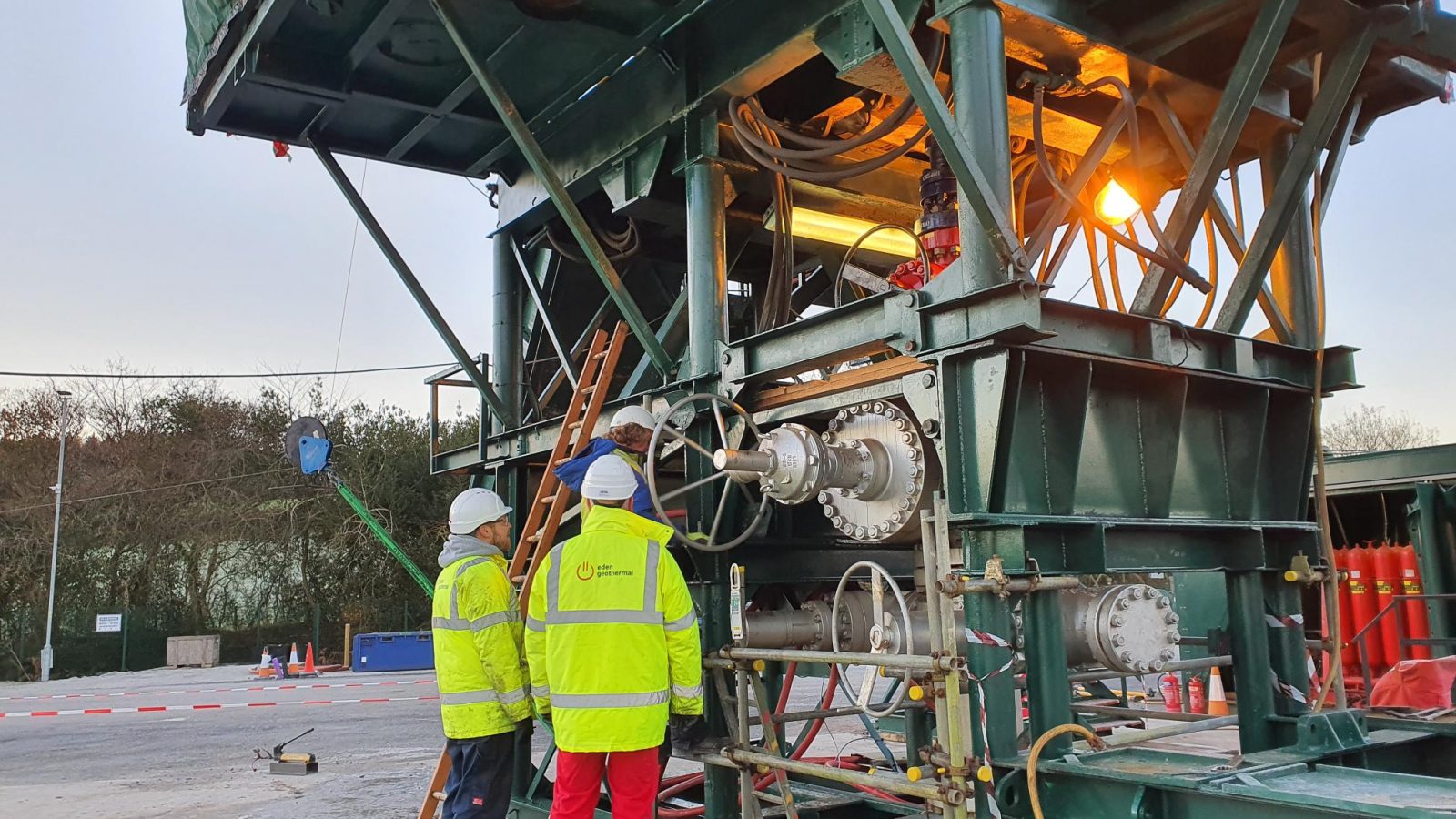 Drilling EG-1 has been followed by well testing. Our initial phase of well testing started in late January 2022 and lasted several weeks. Further testing was carried out in August / early September 2022.

Carry on reading to find out what’s involved in well testing. And if you have any questions about well testing, please get in touch: info@edengeothermal.com

What is a well test?

The two key elements for a successful deep geothermal energy system are heat and permeability.

Drilling EG-1 has enabled us to access a naturally fractured geological structure in the granite at a depth of around 4,500 metres. In this zone, it’s very hot, and the natural fractures present in the rock enable water to flow through the granite.

Well tests provide us with more detail about the permeability and water flow characteristics of the target zone, so we can better understand the geothermal resource in this precise location. This detailed understanding enables us to work out how the geothermal system will perform, and what its outputs are likely to be.

The main aim of the tests is to assess the permeability of the formation around the well, by testing the ability to inject water into the natural fractures (injectivity) and to produce water from these fractures (productivity).

First, injection tests are carried out. Using bespoke pumps, cold water is injected from the surface down the well, at low pressure and low flow rates. Over the course of several days or weeks, gradual, incremental increases are made in the flow rate, to assess the well’s ability to accept fluid. Pressures and flow rates are continuously monitored and recorded.

The other aspect of well-testing is to perform production tests to assess the well’s ability to produce fluid. In an ‘air-lift’ test, compressed air is injected down 600 – 700 metres of open-ended tubing placed in the top of the well, inducing a drawdown on the water level within the borehole. This in turn encourages hot water from the formation surrounding the openhole section of the well to flow into, and up, the well. The fluid produced at surface during this test is a mixture of air and water and so it is passed through a separator unit, where the air is separated and released and the water is conducted into a storage lagoon. This is usually a relatively short test (12 – 24 hours) and is the type of test where steam may be seen being produced at surface. During the test, downhole pressure and flow rate are continuously monitored to provide data about the well’s productivity.

The test programme at Eden Geothermal

At Eden Geothermal, the first phase of injection testing started in January 2022. Testing was paused following a felt seismic event (1.7 magnitude, 1.56mm/s Peak Ground Velocity) on 9th March, and resumed a week later, being completed at the end of March without any further felt seismicity.

In August 2022 we carried out a production test, and more injection testing. This was completed in early September 2022.

The last round of injection testing before the installation of our coaxial heat system is being carried out over a period of 5-10 days from November 21st 2022.

Even low levels of injection and production can lead to adjustment and settling of the natural fractures in the rock, so we expected that our seismic monitoring network, installed before drilling started, would detect some low-level seismicity (microseismicity) associated with well testing.

Usually, any such microseismic events are so tiny that they can’t be felt at surface. But because our monitoring network is extremely sensitive, it can pick up and locate the minutest of movements, many kilometres below ground, which would otherwise go unnoticed. Microseismic monitoring data is a key tool during well testing because it provides us with essential information about the permeability of the formations around the well, and the spatial movement of water through the rock.

In addition to being a useful analytical tool, monitoring the real-time data from our seismic network helps us to manage and control our operations, so that we maintain microseismicity within limits which don’t cause annoyance or disturbance to our neighbours. While we can’t entirely rule out the possibility of an event being felt or heard at surface, in such a case we can stop operations while we investigate the source of the event, and can change our operating conditions to reduce the likelihood of further felt events.

The first stage of our well testing programme, between January and the end of March 2022, consisted of a series of injection tests.  We continuously recorded hydraulic and seismic data through this period.  Our monitoring system recorded over 300 microseismic events, and the data from these events are providing us with the information we need about where the water flows in relation to the well.  Most of the events we recorded were tiny, being below Magnitude 0. The largest was a Magnitude 1.7, which was felt and heard at surface.

You can find out more about seismicity – both the natural seismic events which regularly occur in the UK and so called ‘induced seismicity’ from activities such as mining, quarrying and drilling – in this short film, which also explains how our seismic monitoring system works and the levels within which we operate. You can also download our Seismicity FAQs and Information sheet here.

And there’s also more information in the FAQs section of our website: FAQs – Eden Geothermal